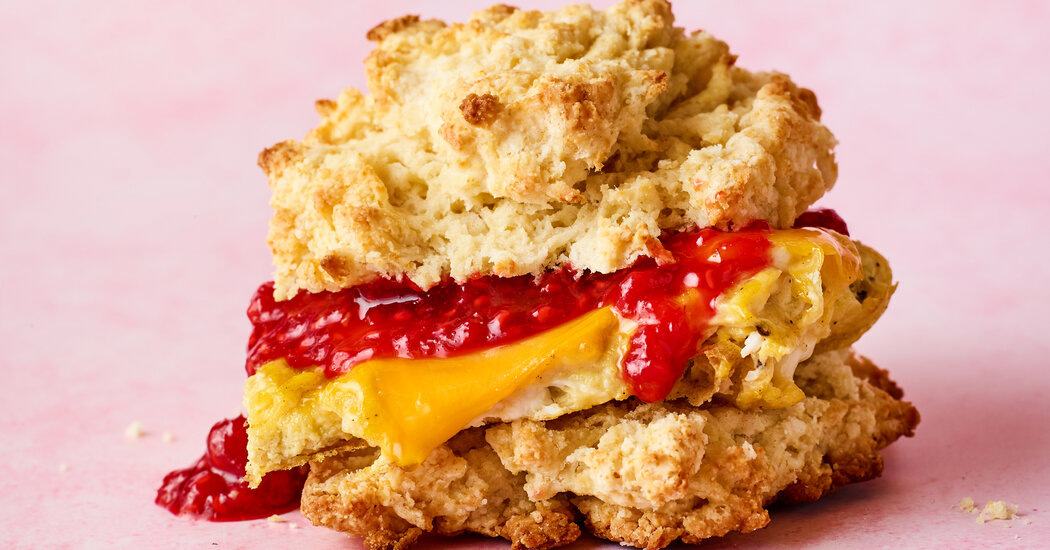 There’s a thin red line weaving through the egg sandwich at All Day Baby, a restaurant in the Silver Lake neighborhood of Los Angeles, and it’s at least one reason crowds come for brunch, despite the impossible parking. That alluring condiment? It’s strawberry jam, which runs down the shiny slide of American cheese melted over scrambled eggs on a fluffy biscuit. The optional sausage patty or bacon (or both) are just that: optional. The berry-red jam is what makes the dish — and it’s a sandwich you’ll definitely want to cook a version of at home.

Jam in savory sandwiches isn’t new: It’s sometimes spread in fried ham-and-cheese Monte Cristos, smushed against turkey in an Elena Ruz and, more recently, swiped on soft bread in Inkigayo sandwiches made famous by K-pop bands and their fans. In parts of the American South, adding jam to a sausage-egg biscuit is the sandwich equivalent of asking for honey with fried chicken, which is to say, a great idea.

The inspiration behind the All Day Baby breakfast sandwich comes partly from the chef and co-owner Jonathan Whitener’s extended family in the Carolinas, but primarily from his Southern California upbringing. When he was a child, he asked for packets of strawberry jam at McDonald’s when ordering an egg and sausage biscuit, and discovered how much he liked the sweetness between the salty layers. It became a teenage ritual.

When he was opening All Day Baby, Mr. Whitener, 35, returned to that fast-food hack as he chased diner nostalgia for his menu. He charged the restaurant’s pastry director, Thessa Diadem, with recreating it.

She had no distinct memories of biscuits — certainly not before she moved to California from the Philippines at the age of 13. But she knew they were the key to the towering sandwich Mr. Whitener envisioned.

The jam she created was easy and obvious. “If you think of a biscuit sandwich, it’s such a savory, fatty, heavy thing, and adding a little lightness, something fruity and sweet, just balances the whole thing,” she said.

What she needed to work on was a base that was sturdy enough to hold hefty fillings without falling apart, but still maintained a buttery tenderness. After hundreds of test batches, Ms. Diadem landed on perfection.

“Not having a point of reference for what it should be, Thessa wasn’t so attached to the tradition of making it the way it should be made,” Mr. Whitener said. “That made her biscuits better.” Because the biscuits are a signature menu item, Mr. Whitener and Ms. Diadem declined to share her formula.

But it wasn’t meant for home kitchens anyway. Ms. Diadem noted that her recipe was created for the restaurant and evolved with demand — from two dozen biscuits at the start to hundreds now on any given weekend — and that the ideal biscuit depends on the circumstances.

For the home cook who needs to bake only a few, drop biscuits are the way to go. They don’t require cutting dough (or cleaning the counter afterward), but they do develop crackly shells and tender centers similar to Ms. Diadem’s rolled rounds. I use milk instead of buttermilk in mine for a sweeter biscuit, then, once they’re baked, introduce a little tartness by slathering them with raspberry jam. Store-bought works just fine, but my fresh version comes together in a skillet in under 10 minutes and tastes especially good when cured pork is slipped into the sandwich. Strawberry jam delivers a more straightforward sweetness that’s always welcome.

Whichever spread you choose, you’ll want to use American cheese, as Ms. Diadem does. It melts in the soft-stretch way that only a processed cheese product can and complements the sandwich’s sweet elements with its creamy saltiness.

Whether or not you have any nostalgia for a biscuit breakfast sandwich, you’ll feel some connection to this playful, comforting dish. “I grew up eating Kraft singles. They have that nostalgia effect,” Ms. Diadem said. “I’m taking a lot of things that remind you of something and then turning them into their own thing. I love the fun of it.”

Here’s the Menu for You

Stock futures are little changed with S&P 500 on track for...

Why CircleUp thinks machine learning may be the hottest item in...

As Russia Diverges From the Global Economy, Soviet-Style Scarcity Looms

The Sunsetting of the Girlboss Is Nearly Complete

Your Friday Briefing: Where Were the Police?

Ray Liotta in ‘Goodfellas’: How the Right Actor Turned the Right...